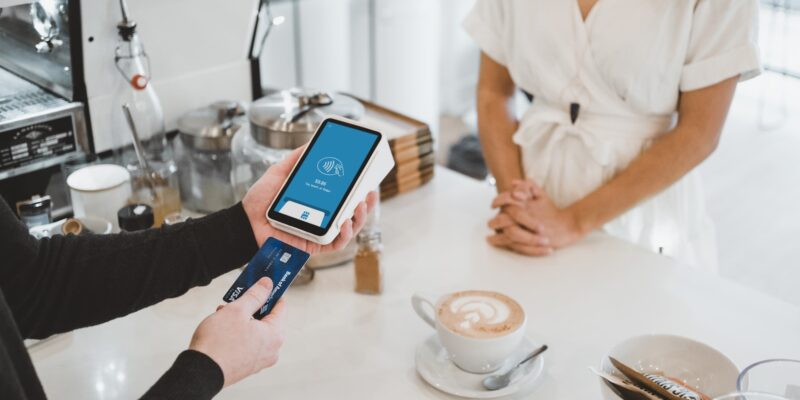 Is Block Inc one of the best digital payment platforms in 2022 and beyond?

The company also runs Cash App as another segment, which facilitates an interpersonal payment network.

It also introduced a Spiral (square crypto) which is used to build open-source projects using decentralized currencies like Bitcoin and blockchain technologies.

Block has operations in at least 9 countries including the US, and Ireland. Japan, France, Australia, Spain, Canada, and the UK. The company has no formal headquarters.

It changed its name from Square Inc. to block in 2021 after a partnership with Tidal. It employs over 8000 employees as per the latest statistics.

The company has been on a bumpy ride this year as it was swept by the market pullback, losing more than 72% in the past year.

It has recently found greener pasture in the market and has been on a good run over the week. It has outperformed the market and its competitors in the past day.

On the legal side, the company is battling a lawsuit from H&R Block which is against the use of a similar name, making it difficult to differentiate the two.

H&R Block has the upper hand so far, but proceedings are still ongoing.

Block is currently a trending stock and it has quite a following from the crypto community as well. It has announced a collaboration with its partner circle to encourage the adoption of USDC.

Fintech is going all in on decentralization, and this could go either way. Some analysts argue that its involvement in crypto is impeding its growth.

Plans are underway for a new payment application on the iPhone ecosystem in the US called Tap to pay. This solution provides faster and better accessibility in processing transactions.

$SQ shows prospect despite stumbling off earnings target in the last reports.

The company started as a mobile payment company but has since diversified into other sectors such as Credit lending, business software, and more.

$SQ stock was once the darling of the market after it went public in 2015. It has since fallen to extreme levels as the sell-off continues this year.

The fundamental strengths of the business are unrivaled, although the space is super competitive. Venmo, PayPal, and Amazon are all looking to grab more market share.

Major innovations have been witnessed in the past few years such as the launch of Cash App, and acquisitions of Afterpay and Tidal.

Square is their founding segment which started as a point of sale (POS) terminal between merchants and customers.

This further evolved into a myriad of comprehensive services like payrolls, invoicing, websites, Inventory, et cetera.

The company is rapidly growing internationally, amassing as much as 40% growth per year since 2015. It initially targeted small sellers and helped them grow their business.

Many of these businesses grow to become fairly large and thus the company has also positioned itself to work with big and medium enterprises alike.

Concerns arose this year as the market was in turmoil and consumer and business spending subsequently declined.

Some analysts have downgraded the growth potential of its Afterpay and Square segments citing:

Square has worked with big players like Sofi stadium on their concessions. Big business sees little to no disruption no matter the economic swings.

Additionally, many of its clients are essential business and no matter the market situation underlying demand still exist.

The markets only represent the sentiments of investors toward a company but do not reflect the actual performance and growth of the core business.

Founder Jack Dorsey is particularly interested in crypto and as a result, the platform has adopted mechanisms that facilitate not only the processing of tokens but the trading as well.

Spiral is especially focused on crypto and helps build open-source projects to advance the use of Bitcoin. Its other segments are also involved in crypto as well.

Experts do not ascribe much value to these crypto-related projects, and some believe that they could do well even without Bitcoin.

$SQ was doing well last year as a Fintech platform before identifying with Bitcoin. Tech has generally taken a hit and $SQ is no exception.

The fate of crypto is still unknown, although Jack Dorsey is tipping for ‘hyperbitcoinization’, where all fiat currencies fail.

However, the biggest opportunity for $SQ lies elsewhere and that is in decentralized digital payments. CNBC touted Block as the ‘bank of the future.

It stands at an intersection to offer users an alternative, once the CBDC (Central bank digital currency) is implemented.

Its traditional ecosystem made up of Square and Cash App are strong pillars that will ensure the transition to the future, apart from its newer segments. 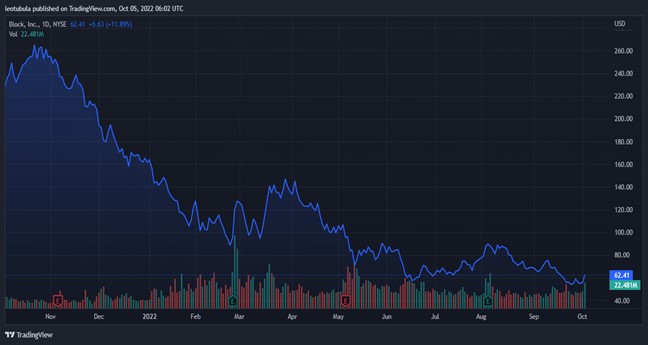 It has surged by +13% in the past week, showing a lot of buying activity. From the chart above, we see a massive collapse over the year as the market went vile.

The stock is only beginning to rise from the ashes but is still miles away from its all-time high. The stock is now very attractive to value investors who see a fair deal at a low price.

Day trading the stock using options is the best way to maximize returns in the havoc. A short from the start of the year would have equally paid off, as it hit its peak in November last year.

The shares outstanding have increased dramatically, from 376M to 581M in five years. Although this is heavy dilution, there’s also significant growth along with it.

The stock bears different perceptions but is generally viewed as a solid growing business. At a market capitalization of $36.83, it is believed to be slightly overvalued.

Others hold a contrary viewpoint. One observer questions that:

Yes, we have inflation, and the Fed is raising interest rates, but does that justify this share having a lower valuation than in 2018 when the company was doing about ¼ the revenue?

The company has a lot of potential but while it’s growing in the revenue aspect, the low return on invested capital and large P/E ratio is very appalling.

While past performance does not indicate future performance, SQ needs a paradigm shift in its operations for the metrics to get better.

The impact of blockchain is yet to be seen.

Assuming the same growth levels in coming years, $SQ is fairly cheap after the drop.

Block has not yet realized full profitability and is still in the growth phase. It announced the second quarter results up to June on the 3rd of August 2022.

The results amazingly surpassed analysts’ consensus despite a general decline from the last quarter.

This was due to drag by some of its segments.

Square crushed the metrics generating a gross profit of $755M in the quarter, increasing by +29% over the year. Loses were accumulated in consumer receivables and the Cash App.

The CFO Amrita Ahuja together with CEO Jack Dorsey believes that the segments are growing and over time will have a strong impact on the bottom-line margins.

Global uncertainty has similarly contributed to the rough quarter with record inflation in this century driving up the cost of production.

The company is set to announce its next quarterly earnings on the 3rd of November 2022. It is well on its path to becoming fully profitable once its growing segments mature.

Block is by design the bank of the future as stated. Its inclusion of crypto and bullish stance completes the puzzle of making it the best disruptive Fintech platform.

Decentralized finance is shaping the world in a way like never before. Critics of the company’s involvement in BTC are not well-founded as it focuses on the sheer price action only.

Conservative investors Like Warren buffet who have criticized Crypto have acknowledged that the underlying tech is formidable.

The oracle of Omaha is behind the scenes investing in a blockchain-powered bank that will change the landscape.

Block is the union of Fintech and blockchain and therefore has more leverage compared to any player in the space.

It has the backing of serial investors like the Vanguard group.

Central banks run the world and together with the government they are taking measures to fight decentralization.

Executive order 14067 has been issued by the US government, a precedent to the Central bank digital currency.

Block is the biggest and most advanced platform that will ensure where the masses flow for decentralization.

Block could also work with major finance corporations like Visa, MasterCard, and others to build a decentralized landscape.

The CBDC threatens to wipe out banks that are present today as middlemen from the government to citizens.

A surge is expected in the number of users for square, especially as increasing centralization weighs in.

It is estimated that decentralized mobile banks will outperform traditional banking, which is already happening in some parts of the world.

This is the reason hedge funds and capital are fleeing into the stock. All this makes SQ the future of global financial payments.

The fundamentals of the stock make it very appealing. Analysts have ranked it as a moderate buy, with a high price target of $380. This is huge multi bagger.

Technical analysis of the stock reveals neutral signals as the markets are clumsy. Moving averages and oscillators reveal a buy.

The price lag is the best buying opportunity we could see in a long time.

More downsides might still exist as the markets get even more scary, which could be a better entry point. The price is fair at $60 and very much justified.

Block is a good buy irrespective of the market conditions. Dollar-cost averaging of the stock will certainly pay off in the long term.

Banking on SQ is banking on the bank of the future.

Zion Oil & Gas (ZNOG) Water over OIL but will Zion pull it off?