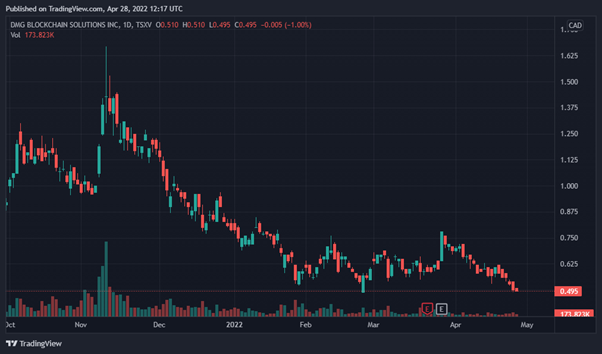 The Dmg company seeks to develop end-to-end digital solutions to monetize the ecosystem.

The company also specializes in the development of licenses, state-of-the-art propriety software and hosting services for industrial mining clients. The company operates in an environmentally-friendly manner.

It was founded in 2011 and has its headquarters in British Columbia, Canada.

Dmg has been involved in multiple activities in a bid to scale up their activities. They released their quarterly earnings report last month, on March 30th 2022.

They performed remarkably well and grew their metrics significantly. The company has launched a large-scale mining crypto facility (85MW), it is located in a 27,000 square foot property in British Columbia and is officially operational.

The huge demand for energy in the crypto sector has propelled crypto mining. DMG has assured that it utilizes hydro-electric power for its operations, which is clean energy.

The company has partnered with other developers in the space like Argo blockchain to enhance sustainable crypto mining.

The company has also announced that it has entered a definitive license agreement to provide technology solutions for Marathon and the new digital currency miners of North America.

Marathon is one of the leading emerging crypto miner in North America and the deal was a plus for DMG.

It has also announced senior management changes, adding a new director to their team. Daniel Reitzik, a founder of the company has resigned and quit his post as the CEO.

Sheldon Bennet, also a founder, has picked up the baton, taking the position of CEO. He has been actively involved in the day-to-day operations of the company and will be a perfect fit.

Steven Eliscu has joined the board of directors, he is a former equity research analyst and his experience seats well with the industry.

Together with Argo, they are set to give updates on the Tera pool project development.

The company is sitting at a market capitalization of C$82.94M. It is still a small miner that is rapidly developing to establish itself in the space.

DMG is negotiating purchases of necessary equipment for their activities. It has adopted immersion cooling – using liquid instead of air – to cool crypto mining equipment. It is an energy-efficient method that is more reliable.

It has made a number of investments in other companies which resonate with its mission. Among these is Black box, which specializes in industrial enclosures, this will allow DMG to have faster manufacturing time, fixed pricing and access to engineering expertise and design.

It also works with Brain capital, a safe-keeper of digital assets for institutional clients. This greatly aids DMG in their software programs and access to the crypto custody market.

DMG additionally partners with Bosonic, an exchange that allows institutional investment while significantly lowering their risk. DMG has a staff of 16 employees a per the latest data. It works with other parties to achieve its operational objectives.

They have shifted from hosting to self-mining, they do both but the latter is given much more importance. They are looking to expanding beyond their current region.

The company holds at least 432 BTC as revealed by their data. The last year was very vital to the company and has driven it to a recognizable position. 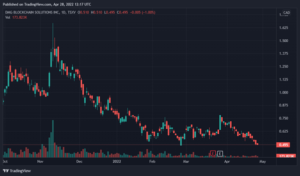 The company is trading below its highs and is currently at C$0.50 at the close of the market in 27th April 2022. It down by -1% from its previous close.

The volume of shares traded is at 361.65K, significantly dropping with the plunge.

The company went public in February 16th 2018 and has mostly been under the radar until the 2020’s, when crypto wildfire spread among the masses.

It went through five rounds of funding securing a total of $101M.  The three main investors funding the company are: Pyfera Growth Capital, Canaccord Genuity Group and Paradigm Capital.

The company despite being young has already made an acquisition, purchasing Blockseer for CA$16M. This was done in February 2018.

The company recorded a record high of CA$4.60. during last year bull run in 22nd February 2021. This was during the great period of quantitative easing that pumped up crypto.

It unequivocally saw all-time lows during the onset of the pandemic when the entire market crashed in March. The stock was at CA$0.04 at the time.

The stock has taken a haircut in the past few months this year, erasing over 60% of its value from November 2021. This has wiped away millions in shareholder value.

The crypto and blockchain world is relatively new thus skepticism is understood. However, this has turned to pessimism in some cases with some calling it to go down to zero.

The miners have in particular fallen out of favor with regulators and environmentalists. The pollution caused in the mining has scared many from the activity.

New eco-friendly ways of mining are being invented each day and this is what DMG has set out to do. The results posted by the company is stunning despite the naysayers.

The company director Justin Rasekh selling off shares has led to speculation of him dumping the stock, but this might not be the case as he might be taking profits given the volatility.

Many companies are down at the moment and DMG is no exception. It has fallen victim to the market situation but has done great for itself in the general view.

The miner is not into anything exciting like the Metaverse, but is doing well even away from major attention.

It has returned significant gains for early shareholders but at the moment it is at insanely low prices. It is down by -12% in the last five days and -34.6% in the past month. The stock has tanked by -50.49% in the past 6 months and -65.5% over the year.

Investors are running to profitable safe havens, but an even better proposition is a massively undervalued unicorn, and that is precisely what this stock is.

While other experts do not believe in penny stocks, which is a valid argument given most of them fail, the ones that become big eventually offer unmatched returns in the triple digits.

DMG is a potential disruptor and if the blockchain gets successfully incorporated into the finance, internet, mortgage and other major systems, it could be a game changer for miners.

The company has posted significant profits recently but revenues have been growing fast. In the recent quarterly report, it recorded a revenue of C$14.2M, a +639% increase.

The net change in cash however decreased hugely by -411.27%, valued at -18.94M. The company is at infancy and growing rapidly thus requiring a lot of cash to do so.

Profits have been rising and the company will be faced with the task of maintaining this growth and further achieving more for expansion.

DMG and other miners have an unknown fate at the moment. A lot of concerns have risen on the essence and utility of crypto.

In their latest shareholder conference last week, The Berkshire boss Warren Buffet and his trusted right-hand Charlie Munger could both not hold back on demeaning Bitcoin.

They are old conservatives and believe in the tangible value of products. While this approach is by all means valid, it is limited in tapping future prospects.

The internet was not backed by anything tangible, yet it rose to become an invaluable necessity today. Crypto and specifically blockchain is the internet of money and is just as disruptive.

The future of the Dmg in view of the blockchain seems lucrative. This technology is here to stay and change how transactions and a myriad of other interactions occur.

Crypto currencies are a gamble, so to speak, due to political risk by governments which is going for crackdown on the sector. Dmg blockchain solutions will serve a vital role in the blockchain space in the coming years.

DMG and other miners fluctuate based on the trading price of crypto. The crypto market is arguably the most volatile out there, thus a risk/reward opportunity.

The company is bearish at the moment with rising interest rates crushing the markets including crypto.

It is looking bullish in the future with developments in blockchain technology advancing the sector.

Moving averages indicate a strong sell while oscillators are neutral. It is an overall sell, but it’s worth noting the opportunity to buy in the plunge. 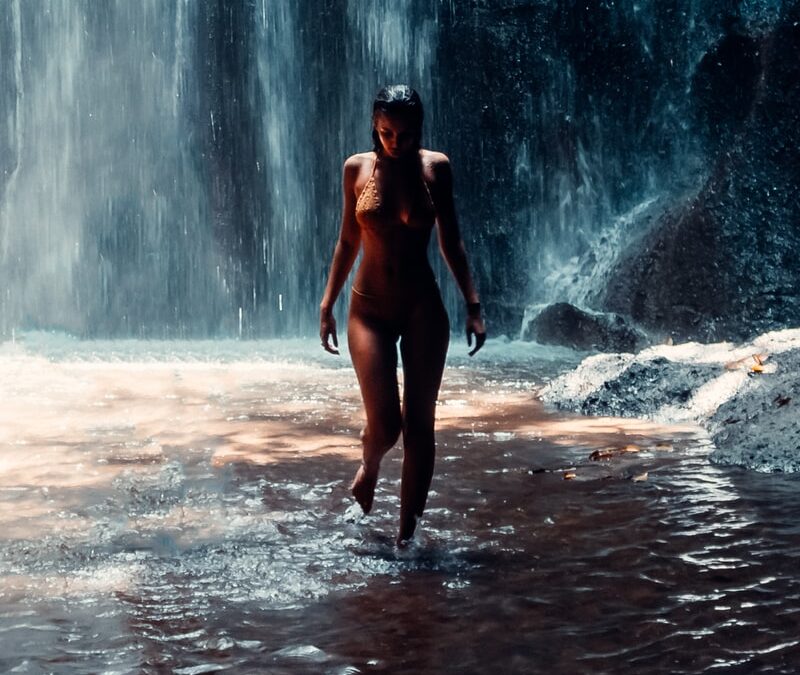 By admin
3 hours ago 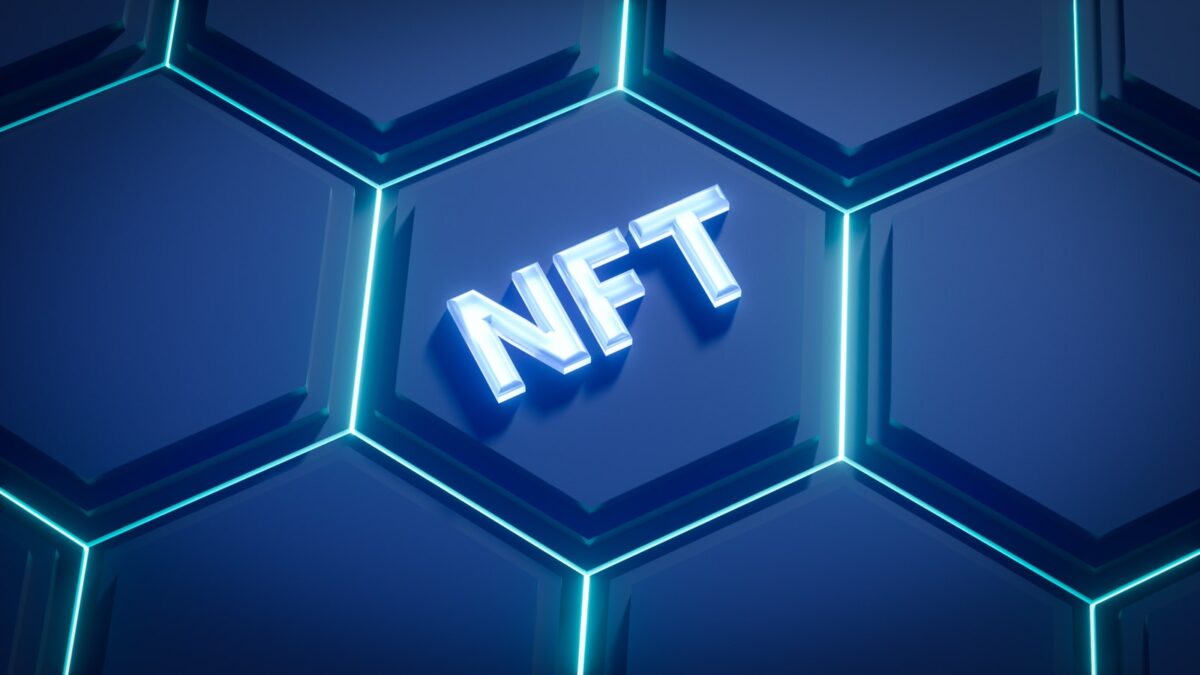 Is Terra Luna the new bitcoin after the drastic fall? 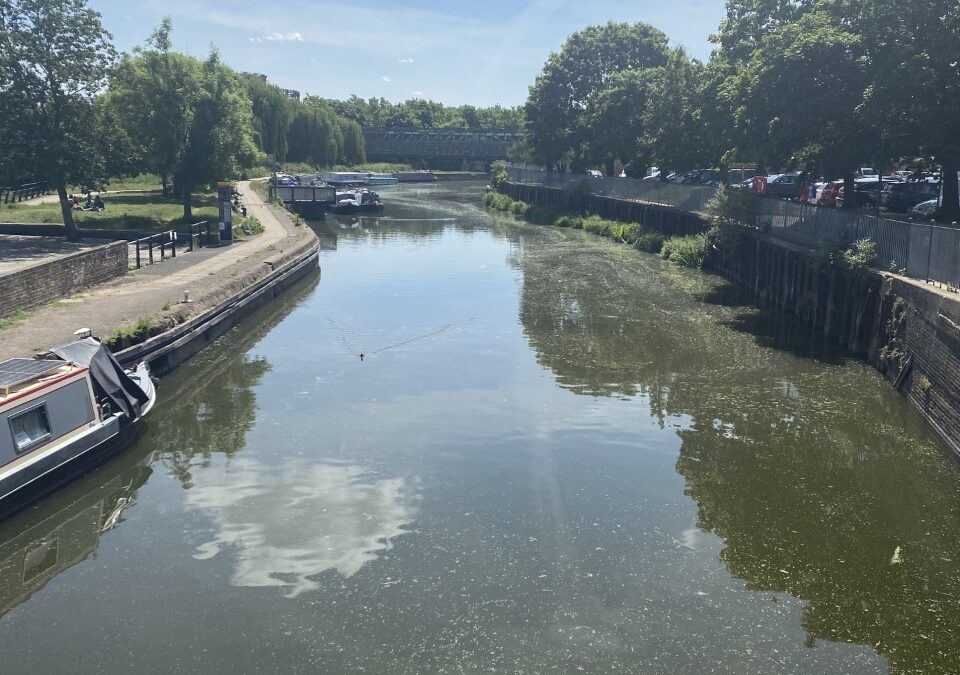 By admin
4 days ago

Can investing in Terra LUNA make you rich in 2022?

Is Terra Luna the new bitcoin after the drastic fall?

Vanguard stock: is VUSA a good investment in 2022?