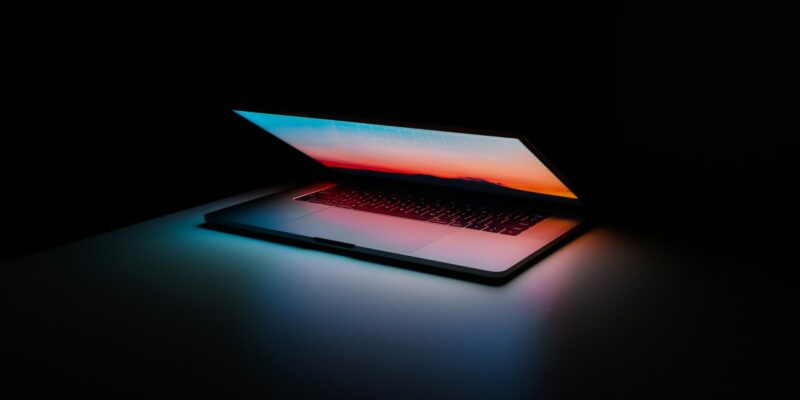 ESS is a revolutionary manufacturer of low-cost, long-duration energy storage solutions that taps the power of renewables using eco-friendly and abundant materials.

It is a maverick in the transition to clean energy via its flagship product, Iron flow batteries.

Research and development (R&D) is intensively taking place with aim of meeting commercial and energy demands.

The batteries utilize iron and salt as the name suggests and have a wide range of applications including Time shifting renewable energy use, Ancillary grids, smoothened intermittency of renewables, and supporting capacity needs.

ESS was founded in January 2011 by Julia song and Evans Craig. It’s headquartered in Oregon, US.

The young manufacturer has been quite engaged despite only going public at the end of the year in October 2021.

This was done through a $1.07B SPAC merger with ACON S2 Acquisition, becoming the first US publicly traded long-duration energy storage company.

Management changes have been reported in the last few months, naming the new COO Vince Canino as its Chief Accounting officer Jeff Bodner stepped down.

ESS is already backed by several mega partners and has gone on to foster working agreements across the globe.

This news bore positive results for its share as the deal is expected to take at least a year to complete. The financials of the partnership were withheld.

The company shook hands with the California state, specifically the Sacramento Municipal utility district for the provision of Energy storage products to the non-profit utility.

About 200 MW/2 GWH is expected to be integrated into the grid come next year.

ESS is growing relatively fast and expanded its operations to Europe in early March.

It has felt the impact of the worrisome markets, receiving a significant rise in short interests last month.

It has backing from mighty and influential corporations and is tipped to thrive long-term.

Clean energy is the long-aspired dream of the human race and electric vehicles have a central role in this. Consequently, we’ve seen a rally in the Lithium commodity, which is currently being utilized to power the batteries.

Unforeseen impediments are increasingly showing that Lithium is not only unfriendly in its extraction but also its usage and disposal.

New technology is now looking to upend Lithium-ion batteries by answering the most fundamental question about energy.

Renewables are proving to be inefficient due to the intermittency of the sun and wind.

The most challenging problem then becomes not the generation of energy but its storage.

Long-duration duration energy storage was born as a result and seeks to address just that using the Iron flow battery technology, also dubbed as ‘Liquid Energy’.

It is no surprise that big players like Jeff Bezos, Bill gates, Soft bank, JP Morgan Chase, and Bloomberg are pouring massively into the sector.

The S&P together with other indices is recording its worst performance in years, without a doubt.

Ironically the battery commodity markets are one of the few ones that are on the uptrend, the only other bullish markets are the Energy markets & the US dollar.

However, ESS is not only focused on EV batteries but also on a broad spectrum of utilities, which could essentially power the next energy transition.

The company is also on the right side of regulators and the government.

The government has passed bills supporting clean energy initiatives including the Inflation Reduction Act, The Green New deal, and the Climate bill to name a few.

What intrigues me most about this technology is its ability to merge cheap cost, efficiency, and eco-friendliness into one package.

Iron flow batteries are non-toxic as they use safe materials. It also recharges instantly and has a more resilient energy capacity.

They are also fully recyclable, unlike Lithium iron which possesses harmful elements and has a limited lifespan.

This new tech is made up of open batteries compared to Li-ion which is closed. The electrolytic fluid in the battery is replaced in the iron flow battery.

The Energy Transition is forecasted to cost to the tune of $130 trillion!

A huge sum of these is going into renewables but a seismic shift is expected to direct funding to long-duration energy storage.

This has the potential to power EVs, Wind and Solar plants, and utility-scale energy storage.

Iron flow batteries are therefore superior to Li-ion in every possible way. De-carbonization is the buzzword in the industry, and this excites investors.

Apart from huge incentives and subsidies put in place to support the industry, another new development called carbon credits is potentially a game changer.

Companies like ESS that reduce their carbon footprint are eligible for these tax credits. Former Goldman Sachs Executive Nomi Prins calls this technology:

The #1 stock for the Energy revolution. 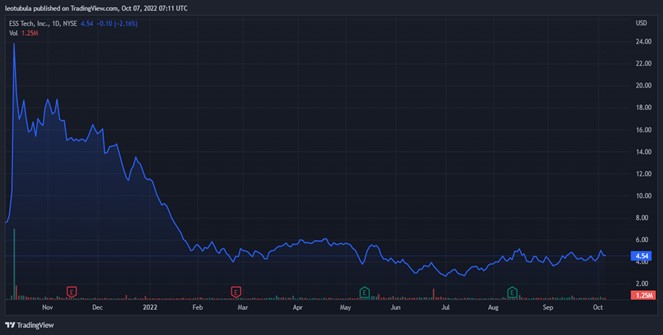 More upward momentum is expected, and the technical indicators are in favor of the bulls. This was seen last week with the stock surging by +8.10% in the period.

ESS is remarkably up +22.37% in the past month. It fell victim to the sell-off over the year and consequently lost more than -21% in the past 6 months.

The share price is way undervalued at this point and almost into the penny stock region. It hit an annual high of $28.92 and is very far away from this at the moment.

The share price is thus greatly below its fair price which could soon explode, given massive capital is rushing into the stock.

ESS draws mixed reactions, but it is commonly agreed that it serves a noble cause. The price of the super batteries is very expensive, with some huge one’s costing north of $1M.

With the potential and prospects the company has, the beaten-down price leads to suggestions that the stock is manipulated.

The company still has more structural growth to achieve and is still quite small at the moment with a market capitalization of $695.83M.

The green light for green energy has already been given and CEO Eric Dresselhuys affirms this in a publication after the National Clean Energy week took place in Washington.

At this level, the company is prioritizing growth over income as it seeks to expand further and gain more market share. It has rivals in its tail including FREYR Battery & Stem Inc.

The profitability profile for the company remains a far-away ambition that is within reach.

It can declare this anytime, but it has chosen the path to growth and expansion, meaning gratification will be delayed.

ESS announced its quarterly reports at the end of June 2022. The results were astoundingly above expectation beating EPS estimates by +33.64%.

Revenue for the quarter trashed analysts’ consensus by a remarkable +82.79%, recorded at $686K.

The balance sheet of the company greatly improved, with cash and short-term investments skyrocketing by +10,446.87%, valued at $192.16M.

ESS has a long way to go but it’s growing at a rapid speed and is tipped to continue in the same direction.

The management is very prudent and is trusted to lead it on the right path. It is a cost-effective business and will therefore amass more clients under its wings.

Tesla was still in the bulk discount business and this new tech could obliterate its lithium mega-pack batteries.

Growth rate is probably several times that of what the car business is per year.

The sector is poised to be one of the biggest disruptors and probably ‘the next big. Bloomberg predicts that demand in the sector will grow 122x by 2040.

This is why Tesla is restructuring from an electric car company to a tech company, in the energy storage sector.

Elon Musk has written two master plans for Tesla since inception and is now expected to draft a third one, entailing details of this revolution.

The race is on to build batteries that will not only power individual components but the entire world, an unprecedented feat.

Lithium-ion has been around for over 50 years and its time might be up. Musk is still concentrated on Lithium but is open to Iron flow batteries.

Billionaires are placing a bet against the richest man in the world and are convinced this will be the future.

Tesla might catch up if makes a switch soon but at this point, it is overvalued and there is too much hype about it.

ESS is an underdog that is rising fast and will fundamentally shape the entire sector.

The best returns this year have come from the battery commodity sector which has gone against the grain to win in this bear market.

This sector is very much in demand and even recession-proof. In this ‘lost year’, resource miners like Sigma lithium & Alleghany technologies made a killing, surging enormously.

CNBC has touted the technology as –

The future of energy storage –

and none has an edge over the sector like ESS tech. This revolution is just in its infancy.

Although fallen this year, this company has what it takes to be the next Tesla, or better yet disrupt it altogether.

Analysts predict a high estimate of $24 and a median of $7 in the near term. The stock is remarkably cheap and a bargain at the current price.

ESS is ranked as ‘buy’ by analysts and seeking alpha ranks it as a ‘strong buy ’. Based on a 7-day moving average, the stock is a strong buy and oscillators are neutral.

ESS is a must-buy at the moment and could permanently leave the downtrodden price soon.

Caution is advised when making an entry, but more downsides would be a great opportunity to grab more shares.

The global market uncertainty has led investors to flee what is termed as ‘speculative assets’. ESS is today where Big tech was in the dot com bubble.