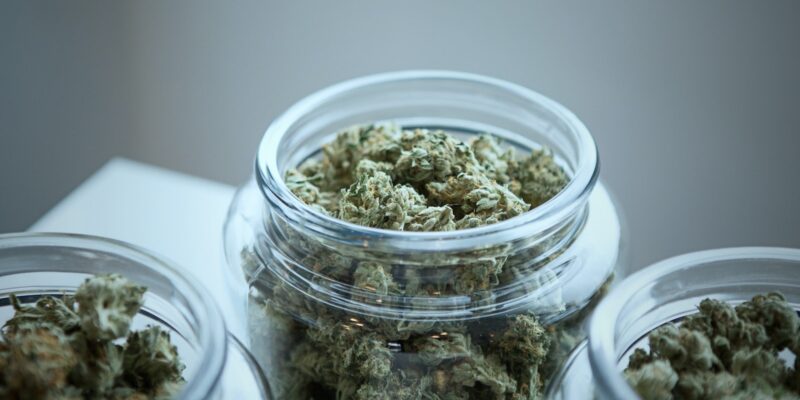 This TabStocks stock picks Article take an in-depth look at the Green Thumb stock to determine whether it’s worth investing in 2022.

GreenThumb industries is a Marijuana producing, manufacturing, and distribution company focusing on the end consumer.

It has two operating segments retail and consumer packaged goods. The company believes in the application of its products for medically related purposes as well as comfort.

The company is headquartered in Chicago, Illinois, and was founded in the same location by Benjamin Kovler in 2002.

It offers both processed and packaged products such as pre-rolls, edibles, concentrates, and topicals. It sells all these under several brands.

Distribution is done primarily to third-party retail stores as well as selling finished products directly to consumers in its retail stores.

Recent Most Important News about GreenThumb

Legalization is the hottest topic when it comes to the Marijuana industry and this has certainly been felt by GreenThumb. It operates majorly in the US where cannabis is yet to be fully legalized.

A bill was passed by the house of representatives to remove cannabis from being one of the ‘controlled substances. This was early in the year and has had no significant impact yet.

The CEO and founder, Ben Kovler, expressed confidence in the company despite any federal change and asserted that they are positioned to prosper regardless.

The sector suffered a sharp decline together with the overall market but it has been resilient and is back up, rallying in the past month.

GTII has been appraised for its position at the top of the emerging cannabis market and could be very well leading a revolution in this direction.

It has shown consistency and steady growth evidenced by its incredible earnings streak of over eight profitable quarters. Their latest report did not disappoint, beating the market in a typical fashion.

It is spreading like wildfire across the US in a bid to get the nation ‘high’.

What is most striking, however, is the many health applications of cannabis which is on the rise and contrary to popular perception.

Rising sales eased legislation, and mass adoption scream in favor of this company.

GTII is on a run after they crushed earnings at the beginning of August. It has a strong culture that resonates with many and seeks to change the view on cannabis.

Laws vary across the US and while some states have been pessimistic regarding marijuana, others have given the ‘green light to allow its growth.

New Jersey is a fine example, encouraging its spread which led to high sales for GTII in the region.

The amazing performance of the GTII this season came as a surprise to many considering the inflationary situation which took a toll on the consumer.

GTII also operates in the Agricultural commodities industry which is usually a hedge against bad markets.

The federal reserve’s hawkish stance against inflation has seen it raise interest rates by 225 points this year translating to 2.50% from 2.25%.

The demand for Marijuana and related sectors is quite solid and highly unaffected by large price changes.

Smoking pot is becoming just as popular as cigars and Europe is poised to legalize it in the next year or so.

Many countries throughout the world have legalized marijuana including Caribbean states, Morocco, Mexico, Uruguay, and particularly important Canada.

Its primary trading exchange in the Canadian CNSX market is very strategic as the economists warn the US equities are inflated and way overpriced.

GreenThumb is well-capitalized to leverage both up and downturns in the market.

The US is its chief market with over 17 manufacturing facilities and 75 open retail locations in the country.

It also has a presence in Canada and is incorporated in British Columbia.

It employs a staff of over 4000 people and serves millions of patients and clients annually.

At least 19 states in the US have either fully or partially legalized Marijuana usage, but the companies have affirmed that this has very little effect and will not hamper growth.

Rivals are inevitable in any industry and the GTI is no exception to this.

It is arguably the top Marijuana company, but other global players like Tilray, Aurora Cannabis, Cresco labs, and more, with Canadian companies leading the race.

The company has a superior management team that has seen thrive in the toughest of times and remain at the helm of the industry.

This is despite a lot of pricing pressure in states in the US and the macroeconomic shocks.

GreenThumb supports the medical markets where cannabis has been instrumental in treating pain, nausea, cancer, and other ailments.

Medical Marijuana is under active research and could yield promising results.

Recreational use of Marijuana is just as big of an industry with more consumers meaning increased growth.

Relaxation is a necessity in both good and bad times, with recessions having a weak effect on smoking prevalence according to case studies. 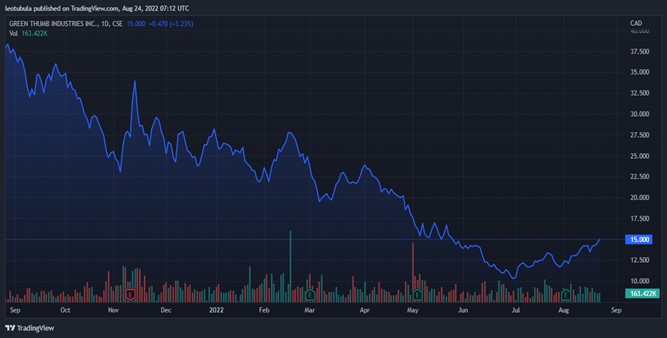 The stock has held up in the past month and is up by a good +23%. Experts have claimed that the last month was a bull window for stocks and nearly all markets were up.

The stock hit a yearly high of C$38.66 in September last year. The tide had turned this year and it has slowly declined to a low of C$10 in July.

Have we reached the bottom? Well, that is unknown about the general market but some have said that this could be the case for Cannabis stocks.

The chart above shows a steady decline until recently the direction has changed.

The stock price is very undervalued for a company delivering such impressive figures. The market Cap is just double its current revenue, which shows a massive growth opportunity.

Some accredit the recent price increase to the new ruling on naked shoring and that the new price is sustainable.

GTI has beaten the market in the past few days and was up by 2% while virtually all the markets were red. This goes on to show the defensive nature of the stock.

While recessionary fears are still ongoing, the stock is traded both in the US and in Canada, thus having a fair chance of cushioning a crush from one market.

As long as the demand remains stable and the overall business does well, the stock could be a ten-bagger considering the low valuation.

Beacon securities analyst, Russell Stanley affirms that the stock is bought stating that:

GTII is consistently one of the top operating cash flow margin producers in the space.

Pros of GTII based on Investors Outlook

Cons of GTII based on Investors Outlook

The company is remarkably profitable, which is unheard of by most of its peers. Cannabis companies are still struggling to report profits and thus it has gone against the grain.

The results were most striking, with this being the eighth consecutive quarter of positive GAAP earnings, beating other Multi-state operators in the MSOS ETF index.

The balance sheet is looking pretty solid with the total assets increasing by +35% over the year, valued at $2.44B. The total equity stands at $1.69B.

Free cash flow for the quarter decreased but still came in at a good $3.95M. Their total cash flow is in the region of $145M.

The company has little debt of about $108M. The price-to-book ratio seats at 2.27 and the debt-to-equity ratio is quite low.

It is now raking in over $1B in annualized revenue, thus with the small market cap of just $2B, it could climb higher in a bull run.

Revenue was mostly generated by its retail segment accounting for about 14.6% of revenue growth. This was due to sales in New Jersey after the adult use was authorized.

Its growing number of retail stores has also contributed to its performance. Although its CGP segment was hurt by supply chain issues, the bottom line was still good.

GTII is amazingly profitable and will maintain this trend in the future.

Cons of GTII based on the General Outlook

The cannabis industry is just in its infancy and leading to potential disruption. As it grows and gains adoption among both the medical community and consumers, leading companies will benefit from this.

Wall Street is yet to place its bets on the industry and will be a game changer if it does. GTII is a leader in the sector and stands to benefit the most from the boom.

The stock has proved to be a defensive play amid recessionary fears and is scaling upwards contrary to the overall market.

Growth is the company’s foremost concern and this could see it become a multi-bagger.

Analysts rate the stock as a strong buy and believe it seats well with long-term investors. It has weathered the storm and the worst is behind them with more leverage than before.

Moving averages indicate the stock is a strong buy while oscillators are neutral. The stock could go down with the market but not as much as most US stocks in a Black Friday event.

GTII is too cheap to ignore with the great run, an entry at the current price or potentially lower will be a huge win over a substantial period.