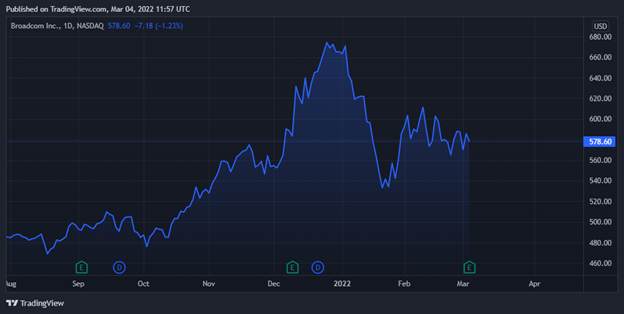 Broadcom Incorporated, publicly traded on the NASDAQ exchange on the S&P 100, S&P 200, and NASDAQ-100 indices.

AVGO is classified in the Technology (Semiconductors and Computer software) Sector. Founded and headquartered in San José, California, the heart of Silicon-valley, it has lived up to the well-founded reputation of the area.

AVGO is an American-based manufacturer, designer, and leading supplier of Semiconductors globally.

There are critical B2B (business to business) producers of the basic components (hardware and software) that form the tech industry.

Consequently, they are a third-party provider to Tech-giants like:-

AVGO has thus established itself as an essential provider at the core of its value chain, running a plethora of subsidiaries under its wing.

Such is the dominance of AVGO in its market niche, that it has received antitrust laws and anticompetitive practices allegations by the European Union.

AVGO has been an interesting topic to analysts and market watchers. Many seem to have similar views concerning the trajectory of this stock.

AVGO recently released their earnings on the 03 of March 2022 which took the world by storm as they performed extremely well compared to many in the tech space.

AVGO is one of the current top trending stocks with many flocking to it based on the impressive Q1 results.

AVGO has been a great trade over the past year and has generally outperformed the overall market by a fairly wide percentile.

At the time of writing, AVGO has spiraled in the past 24 hours. It is also experiencing day-low trading prices which will likely see ups and downs.

Zacks Equity Research analysts released their investigative report on the performance of a number of its forecasts of which AVGO was part.

AVGO shares have jumped 25% over the past year, beating the projected 11.4% rise of the Semiconductors industry done by Zacks electronics.

AVGO has shown strong market performance both recently and over the past decade.

It is now ranked by analysts as a top-tier stock in the NASDAQ exchange. The spontaneous growth of AVGO is credited to several factors that fueled the rise.

Key to this is the widespread proliferation of 5G broadband services

It has performed pretty firmly compared to big tech stocks like Apple ($AAPL). AVGO is seen as a solid ‘safe haven’ given that it has not rallied as much as other tech stocks (Overvaluation).

And it conversely has not crashed like many stocks that have not met their targets (underperformance).

AVGO is a well-consolidated group that has proved to be formidable and a force to reckon with.

They have been very aggressive and bullish on Mergers and Acquisitions, having merged Avago and Broadcom for $17 billion and acquiring a lot of companies including:-

AVGO has a reputation for working with fortune 500 companies and captains of the industry.

The reliance of companies on AVAGO for essential components and services makes it almost too big to fail.

But if history is to go by, former long-existing mammoth corporations have fallen and some analysts believe they have identified flaws in AVGO’s operations.

This is particularly in its Valuation metrics analysis.

Analysts believe that AVGO is trading at a low price compared to the Price-earnings (P/E) ratio, which was about 39.8 trailing for the past 12 months.

This means that investors are paying more than what the stock is worth in terms of earnings per share (EPS).

This school of thought posits that AVGO has a weak valuation and overvalued PEG ratio despite strong growth.

This is however a general market problem and many analysts believe that the stock will progress with its upward mobility in the coming 12 months at a substantial rate.

We can see as depicted from the chart above that AVGO is generally moving up with the occasional downturns.

This is due to the prolonged correction that has sent virtually major every stock plummeting.

This is a nominal decline compared to other major market players that are a little more in the red.

This data translates that Investors generally believe in AVGO potential.

It is a strong buy-and-hold, although it won’t be spared from the wrath of volatility and market sentiments.

If the tech stock bubble continues (now at peak) and rates are kept artificially low, at near-zero or even negative as it has been witnessed, AVGO and other stocks will skyrocket.

It has, however, maintained a steady growth rate over the past seven years that is almost unparalleled.

Should I Buy Shares in the GRAB Stock?