IPI is a manufacturer and miner that is involved in the production of potassium, magnesium, sulfur, and salt essential. The firm engages in making vital agricultural products like Fertilizers, organics, animal feed, etc.

It is the world’s largest producer of Potassium Chloride (Muriate of potash). It is also involved industrials and oilfield solutions industries.

It has three mines in New Mexico, Moab, and Wendover. It operates the divisions’ Potash, Oilfield Solutions, and trio. The company is ranked in the Non-energy minerals sector.

It was founded in January 2000 and is headquartered in Denver, Colorado.

The company has been quiet for the past month but has sparked attention due to higher than average trading volume.

It emerged in the limelight this year after the Ukrainian crisis broke out. The two countries involved in the war were the breadbasket of the globe and accounted for a significant percentile of fertilizer production.

Sanctions on Russia and embargo in eastern Europe curtailed the export of fertilizer from the region consequently leading to record prices being achieved due to limited supply.

IPI one of the world’s leading suppliers of fertilizer saw an uptick in operations as they sold for higher prices. Its overall business improved and its share prices soared.

Potash prices skyrocketed to a 10-year high due to the war in Ukraine. Prices have maintained the high levels with no signs of retracing soon.

IPI has had a fantastic run in 2022, releasing its earnings in early March. They posted amazing figures with everything nearly in green. The positive effect will likely remain for a while.

The market has been in a sell-off and IPI has not been spared from this. Many investors, even long-term holders, liquidated their positions to reap profits from the unsteady markets.

IPI Senior Vice president Robert Baldridge over $1M worth of shares. These insider sales further initiated retailers into selling mode, which saw the stock retrace from its high momentum.

Intrepid Potash is in a good position right now with a market capitalization of $616.79M. Although it has retraced a bit since its peak this year. It is still doing quite well.

The main producers of potash and fertilizers worldwide were cut off by sanctions. This includes countries like China, Belarus, Russia, and more.

This has resulted in a spike in prices due to a shortened supply. In the first quarter of 2022, IPI’s Potash sales increased by 30% YOY, owing to the price hikes.

Gas price increases and supply chain shortages have similarly contributed to the spike in Potash. Potash is a rare commodity and there are only a handful of producers globally.

At one point, IPI was the sole producer in the United States. This has since evolved and many other players have entered the space such as Mosaic, CF Industries, and more.

The fertilizer shortage is speculated to be around for the next two to three years due to supply chain constraints and the wary state of global affairs.

The market for agricultural chemicals tends to be cyclic, it takes a long period of slow growth to instant swings in growth. For IPI, it has heard quite a similar case.

A user on Stocktwits puts it well,

The question then becomes why it is at the levels it is at today. It is very cheap at the moment, even though the demand for Potash is high and so is the price.

The main reason is that the market is shifting away from equities and into physical assets in light of rising inflation. Shareholders are also seeking to collect profits with the high prices for as long as they can last.

The company’s main segments are Potash and Trio. Potash has been their income earner. They have had a low volume of production and consequently less inventory of Potash this year.

This was due to slow production last year and unfavorable weather.

They look forward to expanding their capacity to produce more in this segment.

We are beginning multiple improvement projects at our Potash facilities, including new injection pipelines at HB, another potash cavern Moab, and upgraded wells at our Wendover Facility, which expected will add production volume as early as the spring of 20223 and continue to increase the next few evaporation seasons as our overall brine quality improves, stated the CEO.

The majority of IPI shares (52%) are owned by institutions like Blackrock, Vanguard, Poinstate capital, and more. The general public constitutes 16% of ownership while the rest is held by insiders (32%).

The company was for a long period in accumulation, trading linearly horizontally until this year. They had water rights, which sustained them as they were selling to oil and gas companies but have recently had their water rights revoked. 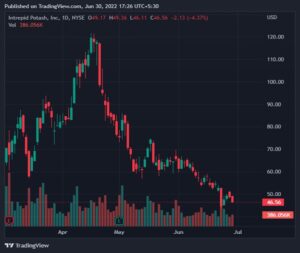 IPI as part of the rally in fertilizer stocks, and was at one point up by 184% in two months. It has since fallen back and is down by (-2.26%) in the past month.

The stock price is fairly justified and a huge fallback from the high recorded this year. It is way below its all-time highs and thus a good entry point.

The stock is affected by the swing of the market but it is a resistant and defensive stock due to the critical industry it operates in. The global food industry is under threat of fertilizer shortage.

The fertilizer market is viewed by many as relatively fixed and static with few changes affecting it in a long term. This is true for both a bull and bear market. The P/E ratio for the company is a low 2.19, a signal that it is very undervalued.

However, some experts are skeptical, cognizant of the fact that prices are at peak high at the moment. This could remain so for a good period since the war is still ongoing.

Just like uncertainty lies in the direction of the war, the same holds for where the prices of these agrochemicals will go next.

One fellow on Yahoo Finance says,

…nothing changes in the fertilizer world. Supply is still super tight and these fertilizer companies are making record profits. I don’t see anything changing anytime soon.

The company is led by institutions that control the majority of the company. CEO Robert Jornayvaz owns 3.5% of total equity indicating strong interest in the company.

The majority are positive about the future expectations of the stock and it could be a winner in a rather negative market. Its fundamental business is strong and well functional.

Pros for IPI based on Investors Outlook

Cons of IPI based on the Investors Outlook

IPI released its Q1 2022 earnings report on the 3rd of May. The total sales for the quarter in the Potash segment were recorded at $56M, a +30% increase compared to the prior year.

The total sales for the first quarter in the Trio segment totalled $41M, a roughly 73% increase over the year.

Its balance sheet and short-term investments stood at $80M as of April 30th, 2022, nearly double from the past year. They have $12M in free cash flow.

This company is killing it financially and could sustain itself in an anticipated recession. Profits are rising steadily and if it continues on this path, the company will be a hyper-growth stock.

Pros for investing based on the General Outlook

Cons for investing based on the General Outlook

The fundamentals of the company are strong and it will likely perform in the near term with the high prices expected to remain for a while.

Food is the most necessary product that keeps us alive. Even in depression, the levels of consumption remain fairly the same.

IPI is set to benefit as they keep up with demand and prevent a looming food crisis. This is a good position that will likely see them weather the market storms.

The stock is a good buy at the moment, the prices are very low and could likely tick higher in the near term.

The stock is in a bullish trend and will likely sustain this momentum. Analysts recommend a strong buy on the stock.

IPI is a buy and an incredible long-term opportunity if patience and diligence are observed.

This makes Intrepid Potash, Inc: IPI a worthy stock pick you should consider adding to your investing stocks and shares portfolio.

Elon Musk: The Biggest Threat To The Market Of Cryptocurrency