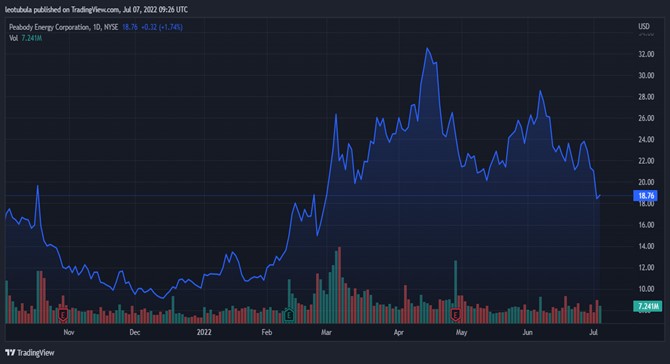 Peabody Energy is a mining company in the Energy minerals sector.

It is involved in the extraction of coal and its distribution for electricity production and steel making.

It is also engaged in trading and brokerage activities. The company operates in several countries including the USA, UK, Australia, and China.

It owns the majority of its mines in the USA in Alabama, Wyoming, Colorado, Arizona, New Mexico, and many more. It is the largest coal miner in the country.

Peabody is divided into the segments: Seaborne Thermal, Seaborne Metallurgical, Powder River Basin, and Corporate & Others.

The company was founded in 1883 in Chicago, Illinois by Francis S. Peabody. It has its headquarters in Missouri, US.

Recent Most Important News on Peabody

The energy boom following the Russian-Ukraine crisis has catapulted companies in the sector to tick higher.

Hydrocarbon companies have been the biggest gainer, with Oil and Coal companies exploding since the year began.

Supply shortages have left the world vulnerable with the importance of hydrocarbons made crystal clear.

Coal and Crude oil had been on the decline due to low demand as a result of the pandemic and the transition to green energy, which threatened their existence.

Peabody and other energy companies have emerged in the limelight as rushed to meet demand whilst the price of coal to near-record highs, almost quadrupling from last year.

Peabody has soared tremendously from the start of the year but has eased back due to market volatility. The price of coal now sits at $400 per metric ton and is projected to go higher.

The company has had its fair share of trouble with regulators. Greenhouse emission disputes are common in the sector.

Coal industries in an ironic twist gained favor from lawmakers when the Supreme court recently ruled limiting the EPA’s ability to control emissions from coal-fired plants.

Insider selling has also been witnessed with the CFO Mark Purbeck selling shares worth $309K.

Two of the company’s subsidiaries announced a repurchase of term loan debt and senior secured notes from Peabody for a total of $90M aggregate principal.

The company released its Q1 results in late April and is scheduled to do so again in August.

The company has come a long way, from filing for bankruptcy to being of the best market performers this year.

Rallying commodities has driven the growth of Peabody and other players in the space.

Growing concerns about the death of the coal industry have been debunked by the recent run.

This has been further reiterated by actions taken by countries that were previously against fossil fuels.

India and Germany are case examples that had phased off coal mining but have now aggressively resumed to meet the energy demands.

Peabody has registered substandard results due to wonky markets in the year before.

The pandemic was a huge blow and coal prices slumped during the period.

The company’s bottom line took a haircut and they recorded poor performance in the past two years.

Sanctions on Russia have been largely accredited to the spiking coal prices.

Russia accounts for 19% of the world’s coal reserves and consequently disrupted the sector when the supply was cut off.

The strong rise in coal prices will lead to higher margins for companies like Peabody and others.

Such a profitable surge has not been seen before in the energy markets with the prediction of new all-time highs in the prices of commodities expected.

Factors that support this trend are the low supply and skyrocketing demand.

$BTU is a big bet to look forward to given the elevated prices. It has been shaky in the past and it’s recovering with the possibility of take-off.

Peabody is a leader in Thermal coal and the power demand is way beyond current production.

Coal is by far the most effective way to generate power in mass, with one kg of the fossil fuel 29 million Joules worth of energy.

With a decent market capitalization of $2.698B, the company is well-positioned for the market ahead. A user on Yahoo finance describes it quite well saying:

This is the cheapest stock in the market. This is the cheapest major, profitable cash-generating company I have ever seen based on Price/EBITDA, P/CF…US thermal coal keeps rising, which is going to lead to HUGE profit gains when low priced contracts roll off for PRB, ILB thermal are replaced by new contracts with much higher margins.

The notion that coal is dead is not factually grounded. Even though it has been labeled the dirtiest fossil fuel, it has made a surprising comeback as the world thirsts for energy.

Renewables are unreliable at the moment and will take a long time to get to mass production, until then the old faithful coal will have to do for now, despite pessimism by mass media.

Coal is the most abundant source of electricity and currently provides more than 1/3 of the world’s electricity.

The cyclic coal market has sometimes made it difficult for companies in the space, most coal miners have at some point filed for bankruptcy. 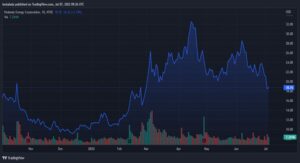 Institutions make up the majority of shareholders accounting for 70.01% of total ownership. Insiders hold 1.14%, and the rest is public float.

The share is justified and dirt cheap at the moment. The stock has fallen from its highs and retraced its gains early in the year.

Experts have signaled a nod given the bullish energy market. Peabody is seen as an undervalued company with huge upsides.

The stock has received a negative outlook due to its bad history. Short interest has been high in the stock but this is quickly changing with the shift in the sector.

Past performance is not an indicator of the future direction and a short squeeze may occur if the stock explodes. It has witnessed momentary surges which have been brought down by market swings.

Although it seems like it’s going nowhere fast, it is slowly and steadily gaining momentum.

Pros of BTU based on Investors Outlook

Cons of BTU based on Investors Outlook

The company released its Q1 earnings in April and the results were not very appealing. They reported a net loss of $119.5M.

The company is making progress in reducing its debt load, with total liabilities recorded at $3.05B, decreasing by -15.24 over the year.

Cash and short-term investments increased by 41% over the year, recorded at $823M. Total assets similarly increased by 10% valued at $4.94B.

Peabody shows a strong signal of turning the balance sheet around. If they overcome constraints and keep operating optimally whilst prices rise, they will crush the metrics and grow astoundingly.

It has diluted its shares but could issue a buyback later to make it up to shareholders. A special dividend is not to be ruled out once they achieve solid profitability, they last issued dividends in 2019.

The financials are scary at the moment things are getting better and the tables will turn in favor of the company.

It is an industry leader and will be ahead to capitalize on the commodities super cycle.

Pros for Investing based on the General Outlook

Cons of Investing based on the General Outlook

The energy sector is very fundamental to our existence. Energy runs the world and this is not affected in the least in case of a recession or even a depression.

Peabody will capitalize on the pent-up demand and meet the supply shortages. It stands to achieve greatly from this.

Peabody is an amazing growth opportunity, that will explode in the coming years.

Analysts rate the stock as a buy and see it price targets as an easy double in the next couple of months.

The stock is a cheap entry and can break the ceiling once it takes off. Moving averages and oscillators are neutral on the stock.

It is an overall buy and a potential multi-bagger given its current state. It is assuredly looking bullish at the moment.

Noble Corp (NYSE: NE) could be a huge growth bagger 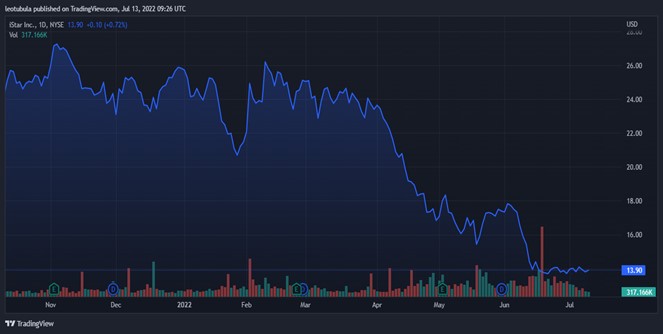 By admin
5 days ago 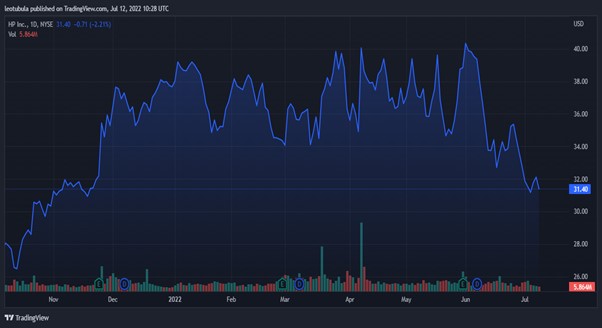 By admin
6 days ago 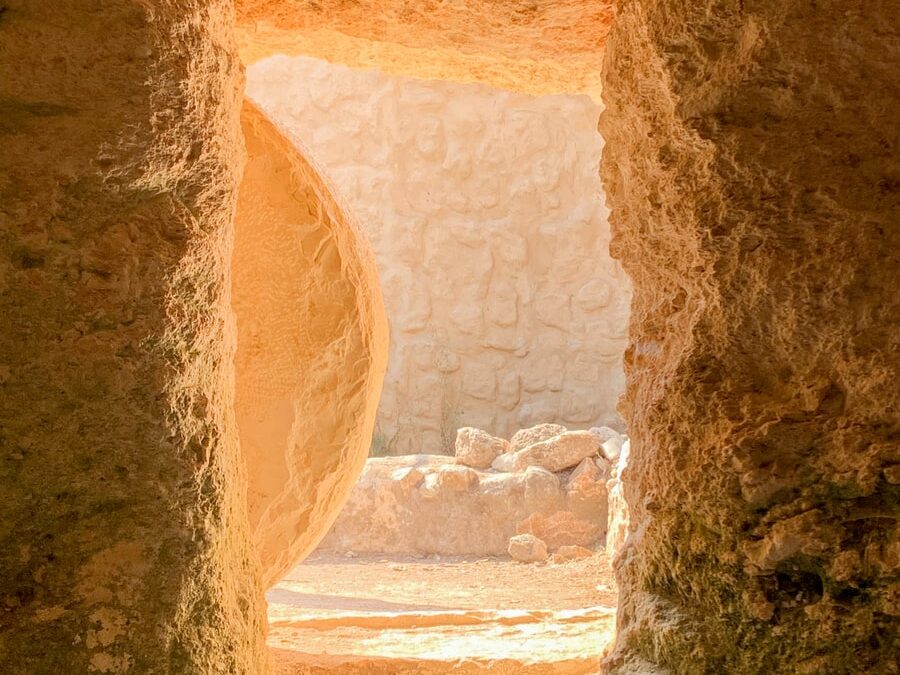 By admin
7 days ago