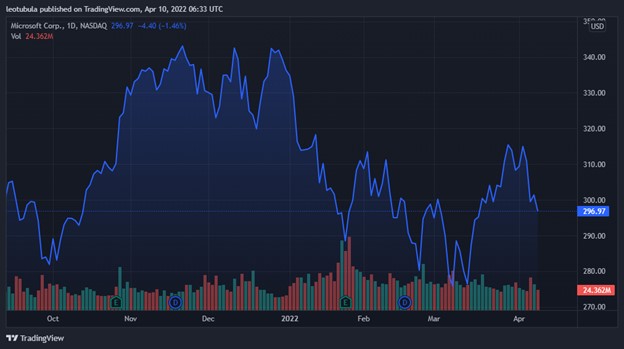 In this article I analyses the Microsoft Corporation Stock and ask is MSFT still a good investment in 2022 and beyond?

Microsoft is a global tech company ranked among the leading ‘big five’ tech companies and one of the biggest corporations in the world.

The Microsoft company engages in the production of software utilities, personal computers, consumer devices, gaming, and other solutions.

Microsoft dominates in the PC software packaged solutions which is its core operating business. It is divided into three general segments:

The company was founded in 1975 by the iconic duo, Bill Henry Gates and the late Paul Gardener Allen, both dropping out of university to run the corporation.

Microsoft employs at least 180,000 people in more than 100 countries. It is headquartered in Redmond, Washington.

The big tech stocks have been on a rowdy run both upwards and downwards.

Microsoft has taken a stand against the Russian invasion of Ukraine.

The company has reported intercepting hacking attempts by Russian spies targeting Ukraine, the US, and the EU. It has revealed that the attack came from Strontium.

The market has been rather volatile for the Microsoft from the start of the year 2022.

The pandemic ravaging Asia and the uprising geopolitical tension is among the reasons cited for the lag.

EU regulators are looking to question Microsoft for breaching anti-trust law in the cloud business.

This is a plus for the tech companies, as they hope to foster and deepen the partnership.

Microsoft is upbeat on mergers and acquisitions, reflected in its history, and has acquired three companies this year alone.

The biggest ever was the recent purchase of Activision Blizzard in January 2022, for a whacking $68.7B all-in cash options.

This will secure Microsoft in good stead in video gaming.

Other acquisitions completed this year include Minit (a Process mining company) and Oribi which is an Israeli market analytics start-up.

The tech giant has also set up new offices in Nairobi, Kenya.

The facility is estimated to cost more than $30M and will serve as a crucial engineering hub for start-ups in the region.

It has further expanded to the Asian markets where its executives foresee a rapidly scaling tech environment that will create confidence in capital funding for potential unicorns.

Microsoft has been a dominant player in the tech sector since its existence.

It has seen high booms especially during the dot com bubble and accelerated growth in the past decade.

However, like many big giants, Microsoft can only sustain the same levels of growth for so long, due to the magnitude of the corporation, which will limit speed whilst approaching market saturation.

Microsoft was at its greatest at the helm of its founders who pivoted I  towards the heights that it is today.

After Gates stepped down and the dot com bubble crashed the company, Microsoft witnessed very slow growth towards the 2000’s.

The company was still growing steadily, but the company left a bad taste, in both the public and government points of view.

Antitrust laws, anti-competitive practices and the company’s dominance in the market, by buying out competition (suppression) were among many factors that attracted spite towards Microsoft.

Microsoft has rejuvenated in the latter decade, with the current CEO Satya Nadella, leading a philosophical revolution.

Nadella has built a positive image for Microsoft as dynamic and innovative.

Nadella spearheaded the development of cloud computing which today is a necessity.

Currently Microsoft has a market capitalization of $2.23T making it one of the largest in the world.

This is an impressive feat considering the setbacks the company has faced over the years.

To diversify its interests Microsoft has actively been buying more companies.

It owns GitHub, Azure, skype and many others.

The pandemic was a blessing to the company with more people working remotely.

Microsoft has actively been buying more companies though the company was adversely affected after the pandemic due to many underlying issues.

Despite the huge fall from last years highs, MSFT is still significantly big in size at the moment, only behind Apple.

The tech stocks have witnessed capital flight due to investors believing them to be overvalued.

Microsoft has set clear its vision to the future as being greener and eco-friendly.

The company ranks amongst the few climate-leaders in the corporate space, rated an A in the CDP climate change score.

Microsoft is ardently determined to work to create a better future, both in the virtual software world and the physical planet.

MSFT is trading below its highs in recent months.

The volume of shares trades stands at 31M, and has decreased as the share price decreased which is a good sign.

This shows that the MSFT stock is sound and is tied to the market thus no manipulation. The tech stocks did rise up significantly during the pandemic and had one of their best runs in the past two years.

The share price of the these tech stocks is not justified, they undoubtedly did well with the lockdown and saw traffic in online users.

But the amount of quantitative easing pumped into the market at that time was huge, via stimulus cheques and corporate bonds purchases.

Insider sell-outs have confirmed this with many exiting tech stocks and dumping shares. This causes investors to lose confidence and equally do not want to long-hold the stock.

Market factors such as rising inflation and other market conditions play a role in performance.

There are contrary views on the outlook of the MSFT stock. Some investors believe that it is a value play and is still undervalued at this point.

Other investors believe that MSFT is at its peak and thus is opened to downsides.

Nearly a decade ago, many investors believed tech was dead and was the best it could get to.

However, this notion was debunked and stupefied even with the skyrocketing performance of tech companies.

Although the past is not a guaranteed indicator of future outcomes it serves as a banner.

The current share price of MSFT is above the intrinsic value approximated at an average of $225.

The stock is still a good play long-term, but one should watch the market bubble we are in.

Proponents for the stock argue that Microsoft is one of the best established and operating corporations in the globe.

It will likely see more avenues of growth since it has diversified into other sectors and is a dominant tech company.

Tech stocks are also likely to come roaring back up after the slump. Tech services are in demand more than ever, to a point of becoming essential to daily living.

$MSFT is a profit utopia for its investors and has been outstanding for the past decade.

The net profit margin increased by +1.06% coming in at a good 36.28%. The numbers have been solid and all positive for MSFT.

The net change in cash exploded an increase of +151.89% valued at over $1.44B. This will see Microsoft waiver any threats like debt and reinvest in themselves.

Cash and equivalents also went up by +42.77% valued at $20.60B. Microsoft needs to sustain such profits for a brighter future.

No absolute prediction can be given on the future of any company since the unexpected always happens.

However, Microsoft is a good company that will likely flourish and reign in the tech industry over the coming years.

It has positioned itself to be very dynamic, tapping into new markets and keeping up with change. Hence Microsoft should survive and thrive in the uncharted future.

Microsoft is bearish at moment due to market fluctuations. It should however do well in the medium to long-term.

Moving averages indicate a strong sell and oscillators are neutral.

The Microsoft stock is an overall sell, but due diligence should be conducted. A buy-in would be appropriate in a market crash.