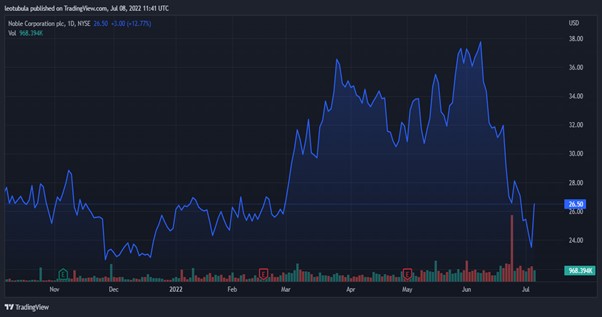 Noble Corporation Plc is an Oil and gas drilling contractor for the Petroleum industry.

It has a fleet of drilling units around the world and is one of the world’s renowned drilling companies.

It operates through subsidiaries and its affiliate Noble Corporation is organized in the Cayman Islands.

The company has undergone a lot of restructuring over the years and was formerly Noble Drilling Corporation.

The company has a century-old history and was in 1921 by Lloyd Noble. It is organized in London, UK, and headquarters in Texas, US.

The company has been a beneficiary of the boom in energy and has made several steps to get ahead of the curve.

Noble has announced its plans to divest remedy rigs and is set for a $375m Rig sale deal with Shelf drilling.

This is an effort to address concerns by the UK competition and Authority Markets following its merger with Maersk Drilling.

Maersk Drilling and Noble announced a merger in late 2021 with the combined company retaining the name Noble Corporation.

The recent sale of five jack-up rigs allows the completion of the merger.

Exchange as part of recovery efforts from a rough pandemic period.

Noble announced its shareholder’s approval of the business combination between the company and Maersk drilling in May.

Offshore drilling activity has been on the rise as the race to replace Russian Crude oil began.

Increased exploration activity has been witnessed with both success and failure reported.

Noble hopes to be a winner during this grace window, it reported its first-quarter earnings in early May 2022.

The results missed expectations, but they are confident in the next quarter.

The energy is booming and the company has ticked higher as they keep up with demand.

The company has revived from the dead as it filed for bankruptcy just two years prior in 2020.

Oil was trading at negative as global movement ceased and oil consumption was at historic lows.

Drilling was consequently abandoned and investors exited the sector in mass.

Fast forward to the present day and the industry is flourishing with peak high prices recorded.

Contrarian investors have benefited immensely by going against the grain and staying in the markets.

The energy sector is so far the best performing this year and the trend is likely to continue.

Saudi Aramco, the middle east oil giant, became the most valuable company on the planet following the boom, surpassing the big tech players.

Noble is in a good position to benefit from this boom. Although it’s a shell of its former self with a market cap of $1.72B, it is strategically placed in the energy industry.

While big oil companies are faced with managing large complex operations and a multitude of employees, this company is smaller and thus has more flexible operations.

Noble also services many of the big companies and several others. Unlike these single companies that face huge risks in case of a downturn, Noble hedges the risk by working with not just one, but a good number of them.

If one company such as for instance Exxon (which is a client of the company) is in trouble, other companies might be in a better position thus lowering the risk of total collapse.

Some have viewed this as sitting on the fence, but it is quite an effective strategy.

It goes on to say:

At the risk of being labeled a cheerleader, NE has all 13 jackups contracted, has a potential partnership with shell, is well-positioned with Petrobras, Middle East and Asia (3 global hotbeds).

The company is the underdog that stands to beat the high streets in the wake of an energy crisis.

Geopolitical tensions have spurred increased demand for oil as Russia’s oil is cut off from global markets.

The Gulf of Mexico is looking very hot as there is limited availability of ultra-deepwater drillships. The situation is similar in Asia and around the world.

Noble can leverage this gap and increase its activity in the areas. Oil companies are increasing their offshore exploration efforts to tap into more reserves as it becomes increasingly necessary to meet demand.

The US government came under fire following spiking oil prices. At over $120 per barrel, oil has become more expensive for ordinary citizens.

The Biden administration has therefore unveiled new offshore drilling plans and could allow operations in the Gulf of Mexico. This is good news for Noble and other drillers. 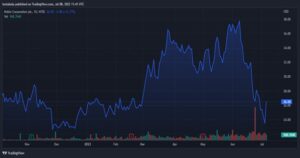 Noble Corporation is trading at a day range of $25.85 – $27.05. The average volume of shares is currently at 1.15M. The stock has been elevated with the soaring energy prices.

NE rose sharply this year starting from March when Putin made his advances. It has since fallen back, but is still up by +1.62 in the past months.

The NE stock price is still at really low levels compared to its peers. It is greatly undervalued and will rise even higher with improved bottom-line performance.

NE is the highest overall rated company in the Oil and Gas Drilling industry with an overall score of 79. Both short and long-term indicators show that is on top of the industry and a strong performer.

Although the company had a rough time filing for bankruptcy in 2020, this was a blessing that allowed it to restructure and cut down on debt.

Experts have cited a backlash in the oil markets due to recessionary fears, however this is expected to have little to no impact on offshore drilling activities.

The markets are in panic mode, however the smart money is opting for value during the chaos. Producers like Noble are the top priority for investors at this time.

Noble has operations throughout the globe and is therefore well-positioned against political risk which is on the rise. Noble Corp (NYSE: NE) could be a huge growth bagger.

Pros of NE based on Investors Outlook

Cons of NE based on Investors Outlook

Noble has not been in a decent financial position for some time. It is actively taking steps to improve its balance sheet and profitability.

The company posted a net income/loss of -$36.66M. This is due to the cash-intensive operation it undertakes and additional costs due to inflation.

Operating expense for the company decreased by 12.01% and was recorded at $41.41M. The total assets of the company increased by +20% in the past year.

Looking forward, Noble is positive that its numbers can grow significantly and return profits to its shareholders. Noble Corp (NYSE: NE) could be a huge growth bagger.

Profits are dismal at the moment, however with the high energy prices, Noble could easily flip the switch and bring in huge income. They stand affirmative on their promise to deliver.

Pros for Investing in Noble Corporation based on the General Outlook

Cons for Investing in Noble Corporation based on the General Outlook

A growth prospect is more often than not, one that is overlooked, undervalued, and unattractive. Noble is all these three and has huge upside potential.

Its core activities are increasing and compared to the high-flying players in the sector, it is a very low price.

A recession that is on the radar will prove decisive in determining productive and resilient companies.

Noble is a future winner because it is well positioned, low in debt, and has a wealth of experience in the industry. It is likely to thrive and rise from the ashes of an economic collapse.

Noble Corp (NYSE: NE) could be a huge growth bagger [Yes? or No?]

Is Noble a buy? The answer is a resounding yes and analysts think so too, presently rating the stock as a ‘strong buy’.

The technicals of the NE stock might not make sense at the moment, however the fundamentals are strong. This stock is a contrarian play that could be a surprising one.

It appears vulnerable, but in the long haul will be a great return. $NE should be strongly considered in one’s stocks and shares investing portfolio.