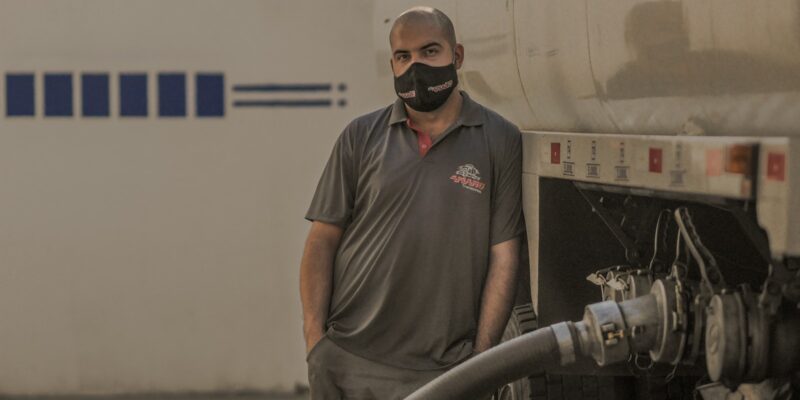 When Zion Oil and Gas test their MJ-02 well, this means they pump oil up; if there’s oil.

If Zion have discovered oil, and they pump it when testing their well, they have to put the oil somewhere.

You can see the size of each of those tanks, roughly each having the capacity of holding 10,000 gallons.

42 gallons = 1 barrel of crude oil. This means that those 3 storage tanks, if they are full of crude oil, is roughly 714 barrels of oil.

Those storage tanks will need to be emptied during the testing phase, when oil is pumped from the well to the tanks.

If they put oil into those storage tanks on their site, Zion Oil and Gas will need to get these emptied in order to refill those oil tanks.

So this means that road tankers will have to visit the site to take the oil away to the refinery.

Zion Oil and Gas will have to have the oil pumped from their storage tanks to the road tankers.

The trucks take the oil to the refinery, which is not too far away from Zion’s site.

When 1 to 2 tanks are full on Zion’s site, the oil trucks come to take that oil away.

Zion will need to book road oil tankers so that they don’t run out of storage space.

Zion Oil and Gas at some stage will need to test for a full 24 hours, and for several days, proper to discover how much oil they can produce in a day.

If Zion Oil and Gas are to pump a lot of oil, they will need a lot of trucks to visit their site.

For example, let’s say Zion Oil and Gas can pump roughly 3,500 barrels of oil per day.

This means Zion will need about 15 road oil tankers to visit their site per day to remove that oil.

This might not occur every day during testing Zion’s #MJ02 well. But Zion Oil and Gas will at some stage need to be testing constantly a few days in-a-row.

Then Zion will know how much oil they can make commercial.

Drilling another well, which Zion Oil and Gas want to do relates to exploring just how much oil there is on their license area, at those depths and within those zones of interest.

This will mean that in future to save many oil tanker road trips, a pipeline from Zion’s oil field could be built to the refinery.

And by the looks of the equipment they are putting in place, it appears that they are expecting some big oil.

In Zion’s AGM held today 08 June 2022, they warned against speculation, however, I’m convinced they are planning something big, but don’t want to let off happy signals.

Let’s not forget that they want to avoid being sued again. Therefore Zion Oil and Gas are playing it safe, and will let the road oil tankers do the talking.

If Zion Oil and Gas were to pump say 1,500 barrels of oil per day from MJ-02 and their zones of interest, this will mean they will need 6 or 7 road oil tankers per day.

The point is, Zion have a massive valve on their site, some 30 feet in height, with lots of inlets and outlets.

Why did Zion Oil and Gas install such a big valve? It’s too big for a mere small oil discovery.

This tells me Zion Oil and Gas have discovered a lot of oil. Fantasy speculation or not, let the facts speak for the reality of all what is known.

Well I am speculating. If you don’t speculate, you won’t accumulate! Are you speculating?

I believe Zion Oil and Gas found something big, but they are trying to keep it low profile.

The testing does not look like your average oil well testing.

Lots of equipment and bringing in experts from the USA, Canada and other countries.

No big ZNOG share buys? No, not yet, but let’s see how this changes if we see those oil tankers roll out of the MJ-02 site.

If this was a normal oil well you would not see so much oil testing equipment being set up.

ZNOG day and swing traders selling at 42 cents, 35 cents having bought from around 13 to 20 cents are taking profits because no news from Zion.

But I would not expect news at this stage given all what is known.

Traders are after fast profits and not looking for a big price. The big share price comes during and following testing.

I believe that before the AGM, Zion had a word with members and told them not to smile too much; not to let off any happy signals.

At one stage Brown got up and walked away. This tells me he knows there is oil, and wants to say so, but has been told to shut up.

Brown did say we would see oil soon. But since then I believe Zion CEO told him to stop it with his emails, because he is giving too much info away.

I think Zion Oil and Gas CEO Dunn, told John Brown and other Executive members to keep calm, not to smile etc.

Also, normally AGMs allow shareholders to attend meetings. I think they did not this time, because they don’t want any information leaking.

There’s no other reason why shareholders could not attend. Corona is over and Zion Oil and Gas could have allowed it.

But in such AGMs shareholders chat before and after to Exec members and obtain further insight.

Zion wanted to avoid this from happening, I believe, due to the fact of MJ-01 disappointment, and because Zion are holding back big news until the right time.

When the question of whether Zion discovered oil was raised, a number of members touched their faces. This tells me they reacted to the question knowing the answer.

If there was no oil, most people who know the answer would react in a still way or display neutral body language.

But because they know and have been told not to tell or show, they move their hands in a concealed manner.

As if their neurotransmitters fired up hearing the question. They got all excited, but at the same time could not show it.

They want to cover up what they discovered when they drilled.

When you look at the big tanks, the big valve, the testing that is going to last a long time; 4 zones of interest you reach conclusions.

And Zion Oil and Gas want to obtain a permit to drill another well. Before testing has started on their MJ-02 well.

Why is the Israeli Ministry of Energy going to grant Zion Oil and Gas another drilling permit, if Zion had not found big oil at MJ-02?

And yet testing has not even started.

It’s no joke. In my view, Zion found oil, and a lot of it from MJ-02, otherwise the Israeli govt – as politically green as the new govt is – would say, well, you haven’t found oil, so why should we give you permission to test MJ-02.

Israel knows, What Zion Oil and Gas know, what we don’t know…YET.

What did Zion Oil and Gas discover in MJ-02 that = permission to test this well, and gives Zion the confidence to seek permission to drill another well, at this early stage?

For r all we know, there may even be more oil storage tanks on the way to the site.

Everything seems to be one big secret at this stage, between, Zion Oil and Gas and the Israeli Ministry of Energy.

And Zion Oil and Gas, before, during or following the AGM have not disclosed to the market what they discovered through drilling MJ-02.

It’s clear to me that Dunn is keeping a tight leash on Brown and other top Execs.

The ZNOG share price has fallen due to day trading profit takers and those who had been expecting news.

The news will following during and after testing. Now is not the time, and this was expected; at least if you had considered all of the factors.

What do you plan to do…buy more? hold? or sell?

I think both day traders and long-term Zion Oil and Gas investors will be buying again given the size of testing about to take place on Zion’s MJ-02 well.