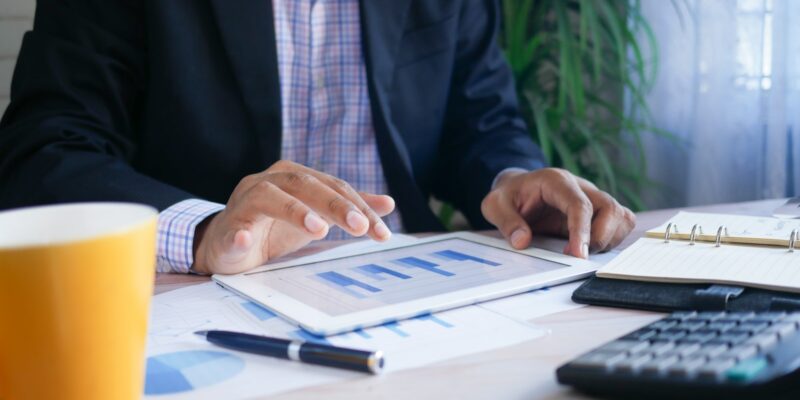 This TabStocks Article analyses StoneCo Ltd (NASDAQ: STNE) to determine whether the stock is worth an investment in 2022 and beyond.

StoneCo is a Fintech company operating in the tech services sector that provides payment services, management tools, and flexible financial products to its clientele.

The customer base of the firm comprises merchants and partners that conduct e-commerce across various online channels.

It engages in the provision of cloud-based technology platforms, electronic payment systems, and POS solutions, to enable businesses to be autonomous and more independent.

It was founded by Andre Street de Aguiar in 2000 and is headquartered in George Town, Cayman Islands.

The company announced that its board of directors recently approved a new incentive plan pool.

This entails a portion of their shares, comprising 19.2 million restricted stock units, to be granted as long-term incentives linked to the achievement of its annual goals.

Another portion (1.7M) is to be granted as regular annual compensation and the rest (11.6M) will be reserved for future use by the company.

These changes are made to keep the company on track and ensure that they achieve its set targets.

The company’s co-founder Eduardo Pontes has decided to depart from the company after two decades of service.

The reasons are personal and remain unknown.

Following his exit, the company has to issue additional government enhancements.

The conversion of his class B shares to Class A shares requires regulation from the Brazilian Central bank.

The company is restructuring and will reduce voting power concentration.

The results were impressive, beating the consensus which saw its shares tick higher.

It helps to turn opportunities into successful businesses to increase productivity, thus making them more effective.

The company had humble beginnings initially starting as Braspag, an online payment processing company in 2004.

Through a series of acquisitions over the years, it finally emerged in 2012, winning its acquirer license in the following year.

They currently operate over 350 hubs in the entire country. The country has a decent percentile of the acquirer market share.

It serves as both an e-commerce and sales services provider to its customers. It has grown quickly over the years.

The company had a great run in 2020 after the crash in March.

This was its greatest year up to 2021 when it rose to peak highs.

It reported a surge in total payment volume by 62.6% in the year.

The massive gains have however been wiped in the past year’s market correction.

StoneCo made an entry into the credit business which was a hasty move that saw it get hammered.

It is believed that they had weak underwriting standards and failed to reprise its solutions when interest rates started rising.

StoneCo is positive that they can make a turnaround, announcing that they will relaunch their credit products.

A bullish user on StockTwits stated that:

These guys are on a roll in building their software business as well as Fintech business. These temp issues related to high-interest rates impacting their $600M worth of investments in Banco Inter and Legacy Credit will prove to be a blessing in disguise for investors.

These profound fundamentals are perhaps what attracted the greatest value investor, Warren Buffett, to the company.

Berkshire Hathaway took a position in the company in October 2018 after the company’s IPO at $21 a share.

The purchase comprised 14 million shares which translated to Berkshire owning an 8% stake in StoneCo.

Many are questioning the decision, and so far given the company is down by 90%.

The oracle of Omaha is a contrarian investor who is known to have different insights.

In the long haul, his bet has always paid off.

Another renowned investor, Cathie Wood has backed StoneCo with her firm Ark Invest holding a 1% stake in the company.

These two investors are growth-focused and they surely see the potential in this company.

Fintech stocks have outperformed banks by 272%, which have been declining.

StoneCo is in good stead to capitalize on this. 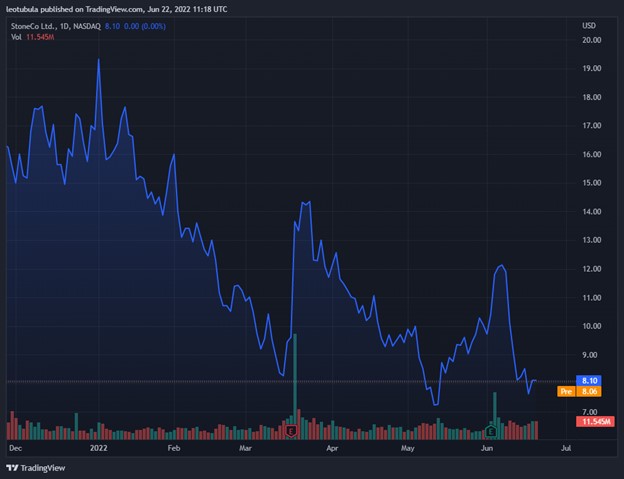 The average volume of shares traded is 9.48M.

The stock reached an annual high of $71.08 last year during its bull run.

Inflationary pressure is believed to be the cause of the crash in Fintech stocks.

StoneCo had internal issues that further accelerated the fall. It is down by 90% from its peak.

The drop has been worrying to investors in the stock, but some see it as an opportunity for a low entry.

There is a lot of volatility, but also a lot of prospects.

StoneCo has already fallen to its all-time lows and there could not be a better time to make an entry.

Its share price is justified at the moment and it is an easy double in a year.

Economic conditions are likely to affect the stock, in case of a recession it could tread a bit lower, but this stock will come roaring back up.

At the time of publishing this Article the StoneCo stock price was $9.64.

Argosy investors published its 2022 letter and covered insights on StoneCo.

It reads as follows:

StoneCo has, like Vizio seen a dramatic decline in value since adding to the investment during the first quarter. I added to the position early in the year after stone dropped significantly due to challenges in their credit portfolio, which they have changed as well as increasing interest rates in Brazil, which the company was slow to incorporate their pricing.

They further added that:

Despite these changes which should benefit STNE later in the year, the market, in general, has obviously continued to struggle and emerging market stocks have been hit even harder in many cases. Expectations are very low for the company now, and there is a good case to be made that the business could be worth much more than the current prices a couple of years from now.

This premise holds some water and many share the same views. The majority are bullish and know that this company has strong fundamentals and is dirt cheap at the moment.

Pros of StoneCo Ltd based on Investors Outlook

Cons of StoneCo Ltd based on Investors Outlook

StoneCo is fairly profitable although this has not been consistent in the past year due to various headwinds.

They released their Q1 reports beating EPS estimates by a rocking 40.38%

This was a tremendous surge from the previous quarter’s R$33.7M and 1.8% margin.

There was a strong improvement in profitability compared to the previous quarter, with EBT coming in at R$163M, just a little shy of a tenfold increase from R$17M in Q4.

The two reported segments; Financial and software services accounted for the generated revenue with the former contributing the lion’s share.

Software services have surpassed the previous quarter’s earnings with the company banking on this division to grow more.

This has recently improved and forecasts reveal the next fiscal year will see the company register positive profitability.

Pros for investing in StoneCo Ltd based on the General Outlook

Cons for investing in StoneCo Ltd based on the General Outlook

StoneCo is growing at hyper speeds and shows no signs of slowing down.

In the past five years, it has recorded an astronomical increase in its users from 83,000 to 1.8 million.

In the same period, it has made multiple acquisitions, donated money to pandemic-related causes repurchased its shares, bought listed companies, and increased its staff to over 15,485 employees.

This is a multi-bagger that will surprise the market and savvy investors recognize this.

Many experts have changed their rating of the stock from a hold to a buy.

Moving averages are neutral while oscillators indicate a buy, the stock is an overall buy.

Experts are bullish on this stock to its underlying fundamentals and Fintech will thrive as more disruption is ongoing is due in the traditional finance sector.