This TabStocks Article takes an in-depth look at Monero (XMR-USD) crypto to discover if it is worth investing in.

Monero is what is known as a privacy token and the most popular one on the dark net. It is preferred for its high level of anonymity in its transactions.

It operates as a decentralized cryptocurrency using a public distributed ledger with privacy-enhancing technologies that are aimed at achieving fungibility and secrecy.

Monero is private by design using obfuscation techniques based on the algorithm that adds  code to each transaction.

This is important to safeguard against an invasion of personal information by ‘big brother’ which is becoming increasingly totalitarian.

This technology makes it impossible to prove the involvement of a certain user even when the information is being intercepted and decoded.

The protocol is open source and it exists on a practically hidden blockchain. MONERO has the third largest developer community just behind ETH and BTC.

It leads to advanced cryptography technologies that are required to run the increasingly complex system, which is very intensive concerning mining and computing power.

Its original author was Nicholas Saberhagen, an anonymous figure as one might guess, and is run by the Monero Core Team. It was launched in 2014.

The token has seen a rising tide in the past few months. It is benefitting from the uptrend in the overall markets. Strong growth in altcoins has been witnessed.

Co-founder of XMR Riccardo Spagni aka Flaffypony has been released from custody by South African authorities who apprehended him on allegations of fraud and forgery.

He has faced charges both from the US and SA governments. The SA court ruled in favor of his release, but is expected to continue with the proceedings at a future point in time.

Questions of the origin and faces behind the token have sparked interest, with some alluding to the former NSA whistleblower Edward Snowden could its creator.

This comes as the only known figure is under fire and seven other developers are believed to have been part of it.

XMR is rallying faster than other tokens, showing optimism that the industry is rebounding.

XMR operates contrary to ETH and BTC which have transparent and publicly viewable blockchains. It focuses on being 100% transparent.

It is now at a market cap of $2.8B after the Crypto market fell from grace. It is now at a critical stage and rising rates have pushed up the markets, an ironic phenomenon.

Earnings season may have refueled the interest of investors to make an entry back into the market.

Finance and banking stocks are expected to rally with rising rates and Crypto linked to the sector might benefit as well.

XMR is focused on decentralization and has a centralized developer team controlling it, but rather a global collection of stellar developers who have been honing its tech for years.

Every coin is indistinguishable from the rest because there is no transaction history. Monera can remain private and still authenticate transitions through various advanced mechanisms.

For anonymous addresses, it utilizes stealth addresses which allow for the creation of unique one-time public addresses on behalf of the recipient.

It also employs a ring signature scheme which is a mechanism that works by signing transactions with a ring of random other potential signers making it untraceable.

An improved version of the Ring signatures that they use is the Ring confidential transaction (RING CT), which hides the amount of the transaction through a multi-layered, spontaneous signature.

The supply of XMR is unlimited. This is contrary to many tokens with a fixed supply.

Monero has recently entered a tail emission program aimed at providing a perpetual incentive to miners.

The focus is to:

This is expected to secure its network forever.

Greyscale, a crypto trust, was considering issuing one for XMR confirmed by filings from last year showing they had registered a Delaware Trust for a Monera variant.

This is great news if it does happen since it would bring in a pool of institutional buyers to the Monero token.

Regulators have been ardently fighting private cryptocurrencies and have gone as far as leveraging technology expertise to bypass the algorithms.

Ciphertrace has claimed to have come up with ‘techniques and probabilities’ for tracing XMR.

Tracking of the token is believed to be hypothetical and no conclusive method has been established.

Kraken, the most popular exchange trading XMR announced plans to delist the token for UK users on its platform by the end of November.

This action has frustrated some users in the country, but the CEO has explained they had no choice due to some of their contractual agreements.

We have to pick our battles and look out for the broader business in the country.

Blockchain tracking companies like Chainalyis have portrayed XMR in negative light citing a proliferation in illicit activities including Crypto-jacking, ransomware, and dark net markets. This is unfair targeting of XMR as other coins have more criminal activities.

This was at a period when the crypto market was soaring to all-time highs. Then came 2022, a shakeout of epic proportions swept the market, causing XMR to tumble by more than 50% from May to Mid-June.

It is now regained momentum and is on a rally. The coin has been relatively resistant compared to the others and is surprisingly still up this year.

Regulatory pressure and geopolitical tensions are believed to cause the surging price of privacy coins as more individuals and funds have poured in to hedge against market/political turmoil.

SMR has an upper hand over the industry standards ETH and BTC, which have fallen short in the test of privacy and anonymity.

XMR is hailed as a hero that we all need and is key in establishing personal financial independence. A total of 18.15M of the token is in circulation.

Privacy has emerged as a key issue that matters and was of the initial promises of Crypto as a whole.

The idea of a Swiss bank account in one’s pocket is still one that is ardently hoped for. Many coins have deviated from this standard but XMR remains true to this premise.

XMR is a sound currency and will reduce the role of government and could go on beat BTC, which is now being tracked by regulators.

Micro strategy CEO and crypto billionaire Michael Saylor has affirmed that if one needs privacy, XMR is the way to go.

In the words of one investor:

Monero is the only crypto where the value of the fiat value doesn’t matter.

Pros of XMR based on the Investors Outlook

Cons of XMR based on the Investors Outlook

Pros for Investing in MONERO based on the General Outlook

Cons for Investing in MONERO based on the General Outlook

The goal of this is to make the token a more attractive token to mine without the fear of it going to zero. This is a risk that BTC miners face and will have a battle in the future.

One of the most important upcoming events is a protocol upgrade that is due. The community has agreed to a hard fork that started at the beginning of the month.

Numerous upgrades will come with this hard fork. Firstly, the number of mixings is set to increase which will improve the ring signature transactions. The ring size will increase from a current 12 up to 16 which will further increase privacy.

Monero is also adding bulletproof plus technology; it was one of the first chains to implement bulletproofs which replaced range proofs. There was a dramatic increase in efficiency following this.

Bulletproof plus takes things to the next level ensuring smaller proof sizes, faster proof generation, and faster verification with aggregation of multiple proofs, resulting in even lighter transactions and a more scalable chain.

Essentially, this will make Monero more private and more useful. This will reinforce the development of anonymous digital cash.

These upcoming developments will likely draw more buyers to the token. Moreover, if the upgrades go through, utility and transaction demand is also likely to pick up.

Many solutions will allow XMR to be traded cross-chain. It has partnered with ThorChain and Haven to develop a cryptonote Bifrost.

Is Monero (XMR-USD) worth investing in?

Privacy coins are the last line of defense in an increasingly surveillance-heavy world. The future is rather chaotic and having a backup is essential.

The token is already public enemy number one as globalists want to retain control of the masses and adopt a fascist governance rule.

Privacy coins and other solutions like gold are a way of combating such extreme measures and having freedom in finances, which is the most fundamental freedom.

The price level will remain solid, but it is much more than an investment; it is a means of asset protection.

The technical factors are looking up for the token. Moving averages indicate a strong buy, while oscillators indicate a buy. If all goes to plan this could be a boom for the price of XMR.

However, caution should be taken as the macroeconomic environment is shaky and a bear market could soon take hold.

An imminent crash is inevitable and that would be a great chance to make an entry for dirt cheap XMR prices.

By admin
5 days ago

By admin
7 days ago 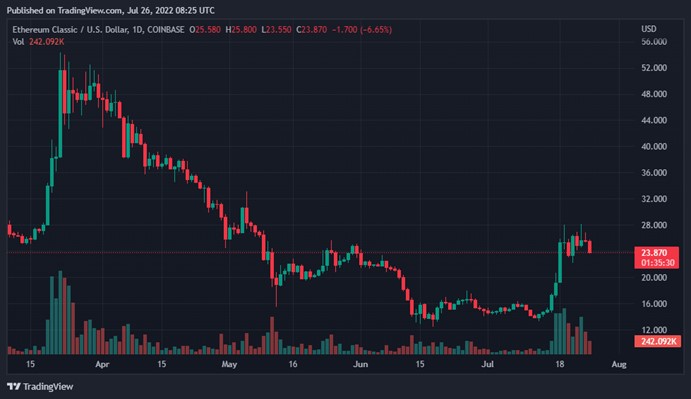